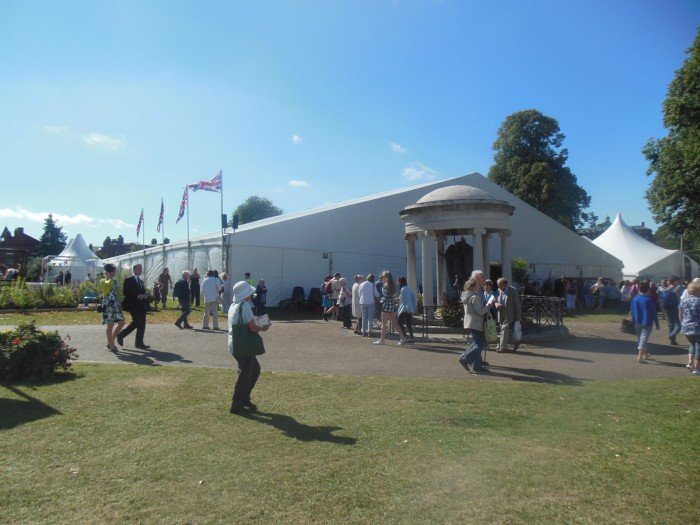 The spectacular Shrewsbury Flower Show has come a very long way since Shropshire Horticultural Society held its first show in 1857, just outside the town, where the flowers were exhibited in a ‘New Tent’ measuring 220 ft long (which was considered to be enormous in those days)!

Danco were very proud to be awarded the contract for the show’s temporary structure provision over the coming years and began preparations for the installation of over 130,000 sqft of marquee coverage, quite the size upgrade in the last 160 years.

As one of the country’s Premier Flower Show events, Shrewsbury has a vast array of entertainment, features & show gardens. The main Quarry Marquee, which is non-competitive, is 80m long on it’s own and is host to some of the top horticulturalists in the country. Danco provided clearspan structures for the two day event, ranging from 3m-30m wide, to house celebrity chefs & chrysanthemums alike and were on-site for nearly three weeks in advance.

Arriving on a beautiful day with our accommodation units in tow, we also organised the provision of ancillary options such as gilt chairs for the member’s enclosure and lighting fittings across the site. As The Quarry is a pristine river side location, our build crew have to be extremely careful with the ground conditions and we provide temporary track way in order to move our heavy vehicles around during the install, also ensuring that the sites are cordoned off when in use as the public have access to the park at all times.

It was a very successful build and our thanks go to the Shropshire Horticultural Society for this fantastic testimonial, we look forward to next year too …

“This year DANCO joined our team for the Shrewsbury Flower Show, which is the oldest long running flower show in the world, as our contracted marquee provider.

This involvement requires the erection of our largest marquees, up to 30m, together with a number of other smaller units to be installed over a period of 3 weeks, as well as significant coordination with many other agencies and contractors. We are delighted to say that DANCO  have carried out their responsibilities with great care and diligence, to all our satisfaction, and the team on site have proved to be a delight for us all to work with.

We will look forward to welcoming them again next year.”